The pier at Southend is the town's most famous landmark featured in books, films and television. Towards the end of the twentieth century, some predicted the end of this seaside attraction but others were determined it should not die. Local pier enthusiasts and the supportive general public fought hard to keep the longest pleasure pier in the world and maintain Southend's top billing for this unique attraction. Those same people, aware of the importance of the pier's past, worked hard to provide a museum where its proud history could be displayed for the enjoyment of everyone. 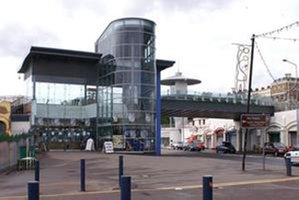 Instrumental to this project was Peggy Dowie who, together with other volunteers, founded the museum. It is still supported by volunteers and by members of Southend Pier Museum Foundation Trust.

The Friends of Southend Pier Museum (FOSPM) was inaugurated for the purpose in 1982, with specific aims to preserve the history of Southend Pier and to create a museum for the benefit of future generations. A proposal was made to Southend Borough Council (the owner of the pier). Due to the uncertain future of the pier itself, a museum of the pier did not receive approval at that time.

By 1984 the outlook was more promising and a further proposal was made and this time approved by the council on the understanding that this was to be a voluntary project.

The Pier Museum is housed in redundant Pier workshops underneath the Pier's shore station which, until 1978, were used for maintenance and repair of the Pier and railway. The building is therefore of historical value.

A small number of volunteers carried out the mammoth task preparing the buildings for Museum use, working every weekend for three years. Throughout this time we also had the support and assistance from the Councils engineering department and Museum Service.

The Mayor of Southend, Councillor John Armitage, officially opened the Pier Museum on 8th July 1989, heralding the Pier centenary celebrations. At the same time the Pier Museum Trust was formed and the Friends changed its name to Southend Pier Museum Foundation.

The Pier Museum is independent, entirely self funding and operated by volunteers.

The Museum's extensive collection of artefacts were salvaged most of which were restored by volunteers and the Pier Museum Foundation.